Poodle On A Perch

The Biennale Art Project is an excellent example of the dedication shown by the City of Vancouver to increase the number and quality of public art installations that line our streets and parks.

The exhibits attract tourists through walking tours and photo opportunities, they encourage greener transportation by beautifying commuter routes and they inspire younger generations of artists, exposing them to alternative forms of expression and larger than life conversation pieces.

Some would say these installations are the sugar roses on Vancouver's frosted layer cake.
Communities inside the city are taking this initiative one-step further by commissioning their own works for public enjoyment. Commissions like the East Side Mural Project take regular urban landscapes and give them colour, history and purpose.

Main Street is no different. While most of the artistic activity occurs in studios, clubs, restaurants and coffee shops, the South Main community is looking to move its art out to the street.

A project has been in the works since 2009 to establish public art along the South Main Street Corridor. The endeavor, labeled "88 Blocks - Art on Main," began with a combination of pieces created by Instant Coffee. These works were produced under the title "A Bright Future."

The project is being funded by TransLink, the City of Vancouver and the Federal Government, with an estimated price tag of $97,000.

This week the second installment was erected near 17th and Main.

The latest installation, created by Montreal artist Gisele Amantea, is titled Memento. To describe it simply, the piece consists of a pole, a perch and a larger than life-size porcelain poodle replica. (see photo)
So far, the installation has received mixed reactions from local residents, some of who are confused by the subject matter.
Amantea has clarified her choice of themes in the following public statement:

The poodle was chosen as a motif for the sculpture and other artworks in Memento because it is expressive of the general surroundings of the street. The poodle is not associated with a particular culture, and can therefore be enjoyed by a wide range of people along the street and in the surrounding neighbourhoods. The sculpture is based on and is a representation not of a living poodle, but rather of a porcelain figurine, the kind of object that might be found in any number of shops along Main St.

The project is a hot conversation piece, inciting direct dialogue and online reactions. The poodle has people talking about the role of art in society. From street buzz to twitter comments, an open discourse is emerging about what public art should entail. The poodle even has its own twitter account: @MainStPoodle.*

Next up for the project is a work by Germaine Koh. 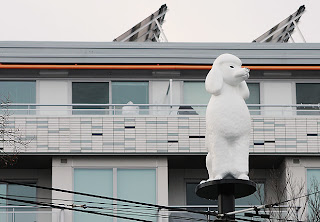 *Favourite tweet from @MainStPoodle: "Have been cast in the new Star Wars movie! Chewie's cousin Poodacca. #BetterThanJarJarBinks"
Posted by Unknown at 20:00